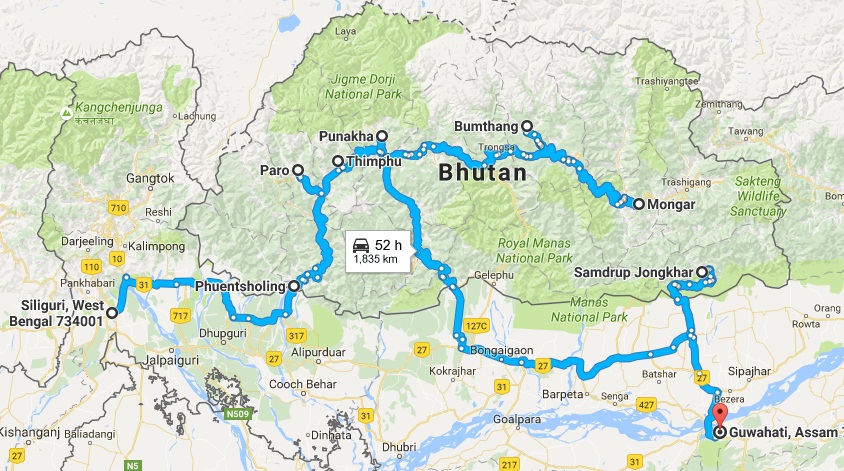 About Places in Bhutan

Bhutan opened its country to foreign tourists in 1974 in order to promote its unique culture and also generate revenue from tourism. But to restrict foreign effect on Bhutan's virtually unspoiled landscape and culture all tourism is controlled through officially approved tour operators. Tourists are only allowed on a pre-planned, prepaid, guided package or custom designed tours arranged through these tour operators or their overseas agents. You cannot travel independently in this kingdom.

Most of the tourism destinations of Bhutan are concentrated around Thimpu and Paro. Of notable interest is the Taktshang monastery (meaning Tiger's Nest). This highly sacred monastery of the Bhutanese is constructed on the edge of a high cliff overlooking the Paro valley. It is more than a thousand years old and is believed to be built at the place where Guru Rinpoche, the father of Bhutanese Buddhism, landed on the back of a tigress.

The Lateral Road is the primary road of Bhutan running from Phuentsholing in the southwest to the Trashigang in the east. It has smaller roads connecting the Lateral Road to all its main cities, like Thimpu, Paro, Punakha and so on. It crosses many high passes, including Tremo La and Do Chu La. The highest pass on the road is at Chapcha and the second-highest pass is at Trumshing La in central Bhutan at an altitude of over 12,500 ft. The road is generally open throughout the year. 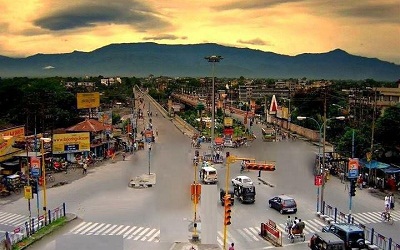 Siliguri is a city in the Indian state of West Bengal. The city is located on the banks of the Mahananda River and the foothills of the Himalayas.
You will receive a warm welcome on arrival at Siliguri. Check in to hotel. Meet the team. Local sightseeing. Overnight stay in hotel. 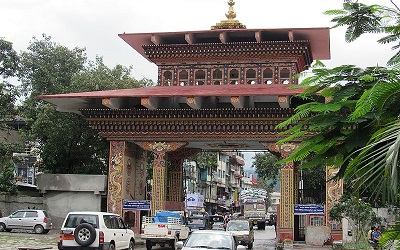 Phuentsholing, is a border town in southern Bhutan and is the administrative seat of Chukha District. Phuentsholing adjoins the Indian town of Jaigaon, and cross-border trade has resulted in a thriving local economy. The border is separated by a long wall with a single Bhutanese gate. Locals can sometimes even cross without being asked for papers. 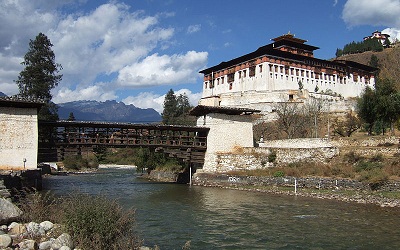 Paro is a town and seat of Paro District, located in the Paro Valley of Bhutan. It is also home to Paro Airport, Bhutan's sole international airport. Rinpung Dzong a fortress-monastery overlooking the Paro valley has a long history. About 10 kilometres (6 miles) outside Paro is the famous Taktshang (Tiger's Nest) Hermitage on the face of a sheer 1,000-metre (3,281-foot) cliff. A scenic view of the town of Paro can be seen from the Tiger's nest. A 16-kilometre (10-mile) road passes up the valley to the ruins of another fortress-monastery, Drukyel Dzong. 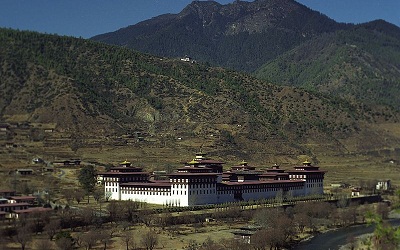 Thimphu, is the capital and largest city of the Kingdom of Bhutan. The city is spread out laterally in a north-south direction on the west bank of the valley formed by the Raidak River, which is known as the Wang Chuu or Thimphu Chuu in Bhutan. Thimphu is the third highest capital in the world by altitude. The culture of Bhutan is fully reflected in Thimphu in respect of literature, religion, customs, and national dress code, the monastic practices of the monasteries, music, dance, literature and in the media. 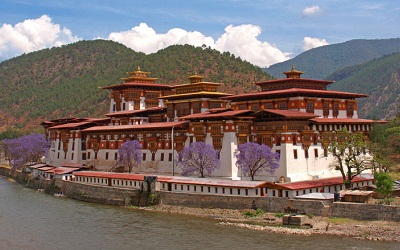 Punakha is the administrative centre of Punakha district, one of the 20 districts of Bhutan. Punakha was the capital of Bhutan and the seat of government until 1955, when the capital was moved to Thimphu. Pungthang Dewachen Phodrang (Palace of Great Happiness) or Punakha Dzong was constructed by Tuebi Zaow Balip under the great command of Zhabdrung Ngawang Namgyal in 1637 and believed to have been completed in two years of time period. It is also the country's most beautiful Dzong.
The Dochula Pass is a mountain pass in the snow covered Himalayas within Bhutan on the road from Thimpu to Punakha where 108 memorial chortens or stupas known as 'Druk Wangyal Chortens' have been built by Ashi Dorji Wangmo Wangchuk, the eldest Queen Mother. The pass is located at an elevation of 10,200 ft on the Lateral Road from Thimpu to Punakha. To the east of the pass, the snow clad mountain peaks of the Himalayas are seen prominently and among them is the Mt. Gangkar Puensum at 23,484 ft which is the highest peak in Bhutan. 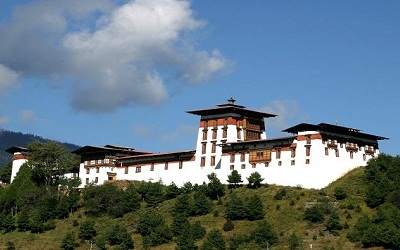 Bumthang Dzongkhag consists of four main valleys Ura, Chumey, Tang and Choekhor. Choekhor is the largest of the four mountain valleys and is widely considered as 'Bumthang Valley'. The scenic valleys are broad and gentle carved by the ancient glaciers. These fertile valleys are covered in fields of buckwheat, rice and potatoes. Apple orchards and dairy farms are also common sights here. This dzongkhag is one of the most richly endowed districts in terms of historical and spiritual legacy. Some of Bhutan's oldest and most venerated temples are found in Bumthang, including Jambey Lhakhang. 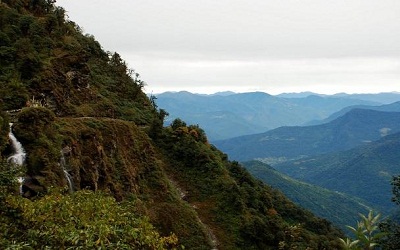 The road approaching Mongar is one of the most spectacular journeys in the country. It passes over sheer cliffs and through beautiful fir forests and green pastures. Passing this way we have the opportunity to visit the Rhododendron garden and on clear days can even catch a glimpse of Gangkhar Puensum (7541 meters), the world's highest unclimbed mountain. The region is known for its weavers and textiles and fabrics produced here are considered some of the best in the country.
Thrumshing La, also called Thrumshingla Pass and Donga Pass, is the second-highest mountain pass in Bhutan, connecting its central and eastern regions across the otherwise impregnable Donga range that has separated populations for centuries. It is located on a bend of the Lateral Road at the border of Bumthang District and Mongar District. 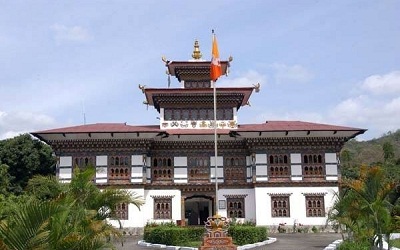 Samdrup Jongkhar is a town located at the south-eastern part of Bhutan and borders the Indian state of Assam. Though there is no clear historical record of the development of the town, it is said to have developed as a result of the construction of the Samdrup Jongkhar-Tashigang national highway in the 1960s. It is also an important economic center of the country where coal mining is an important contribution to the country's economy. This place has a lot of traders and shops and you can do shopping here. 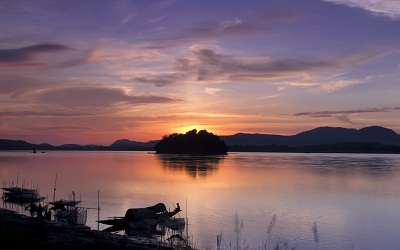 Guwahati is the largest city of Assam and Northeastern India, a major riverine port city and one of the fastest growing cities in India, situated on the South Bank of the Brahmaputra River and the foothills of the Shillong plateau. Located within Guwahati is the ancient Shakti temple of Goddess Kamakhya in Nilachal hill (an important seat of Tantric and Vajrayana Buddhism), the ancient and unique astrological temple Navagraha in Chitrachal Hill, and archaeological remains in Basistha and other archaeological locations of mythological importance.
End of trip. You go back with loads of memories.